GB6GHY: Brian (G4NNS) that the 50th Anniversary of the Apollo Moon Landing is being celebrated at the Goonhilly Earth Station, where there will be a concert featuring theband “Public Service Broadcasting”. Their videos can beviewed on You Tube, search for “PSB Go” to watch a particularly relevant one. In 1969 Goonhilly played a part in relaying the historic Moon landing images for broadcast in Europe. The team, who have used the 32 m antenna under the call GHY6 several times recently, will be on hand to relay greetings messages from members of the audience via the Moon. This is permitted under the terms of their special event license. They will use the callsign GB6GHY. They will set up the system on Friday 19 July for tests and rehearsals with the concert technical team. They will be QRV from their moonrise at about 2230. After the tests we hope to have some time for EME QSOs. From their moonrise on 20 July at about 2230, they will start with greetings messages from the audience and hope to have a QSO with the Perth (VK6) ground station that will be using a 28 m dish and 400 W. They expect to have very big signals. Afterwards, they will be looking for EME QSOs as time permits. Look for GB6GHY on the HB9Q logger. 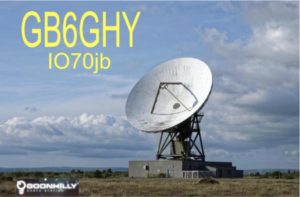