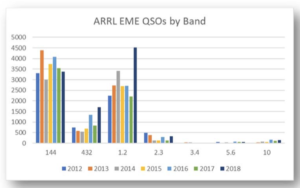 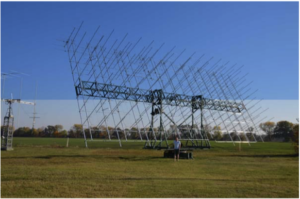 First leg in October were wx and condx perfect and some nice contacts came into the log. Twelve new initials and also some new squares where included. Best QSO was with UA3MBJ who used only 9 watts at his 20 element Yagi. I had 101 QSOs done in October and it is the best score I ever had for the first leg. Especially on Saturday condx were brilliant, I had unbelievable echoes!

2nd leg in November started with foggy wx. I did optimize the system for rain so that SWR would not go bad. Fog seems to be another story. On the first night only 300W output was possible, but it did not decrease the QSO rate that much. All weekend condx were mixed with partial very deep QSB over 20dB! After 10 CW QSOs in October, I could add another 10 including F2CT which was an initial. It has been a long time since I could work an initial contact in CW! In November I worked another 89 QSOs with only 10 initials included and 4 new squares.

Beside the big array I have an 8 x 11 element vertical array. Only one QSO with FR5DN was done where I did not see the station on the 128 Yagi array. On another 6 QSOs the signal was louder on the 8 x 11V, but contact had been completed with the 128 Yagi H‐array. This confirms my decision to put all 128 Yagis horizontally polarized and not 64H and 64V.

I counted about 15 “runaways” which never called CQ somewhere or called me. I tried with R7MU several times with no success, but he had fog and temperatures below freezing point so maybe his SWR was bad? JT activity kept me mostly busy that I was not often in CW area, but I was always watching the CW band in waterfall to not miss too many.

Absolutely amazing and outstanding was Paul’s WA6PY signal. Single Yagi but up to 579 armchair copy. Wow.

After removing the dupes, I count 158 QSOs and 58 multipliers. Best result I had ever! And it shows 432 MHz is not dead, only CW is down in activity. Top country counts are DL & US with both 20 stations worked.

My new antenna worked perfectly and the station gave Murphy no chance. My TR7 is now over 30 years old, but still works excellently. Due to the busy QSO activity, there was no time to give some points on 144 MHz. In the middle of the night it is more and more a challenge to stay awake. Ten years ago, that was no issue, but yet I did fall asleep two or three times for a while. QSO rate dropped to zero then. Hi! Maybe next year I will need some help and we will do some multi‐op contesting in ARRL. BUT it was really fun and TNX to all who worked me.
73 Bernd, DL7APV