Fra MX0CNS Facebook side:
Over the last four years we have done a lot of qrp EME operating and thanks to the dedication of a lot in the community we have had some spectacular results that in the past would of been thought not possible. Not only us here at MX0CNS but also Dennis W5RZ has operated on tiny antennas and also some great portable operations like national parks on the air.
Why do we do this? Well its great fun but also what we would really would like to see is more people giving 70cm EME a go.
Today I was up bright and early for the ARI contest and there were quite a few on the logger. The usual test qso with Bernd was made and signals were ok but not great. As the moon got higher in the sky Bernds signal came up peaking at a solid -10 🙂 So half joking Bernd said ‘ ready to try with a dipole?’ My reply was, I shall put the GTV2 on and see what signals are like. I pulled its reflector leaving just the bent dipole mounted low down on my garden table. As I got back in to the QTH I saw the signal creeping down the display and to my surprise -21. So would this really be possible EME on a dipole? I announced to Bernd I was up and running and after one call an answer! I nearly fell off the chair. The rest of the qso was straight forward. Screen shots were taken and photos of the ‘YBN’ bent dipole to send over to Bernd. My signal was -27 and Bernd was Best -21. Before anyone says ‘tropo’, DT does not lie 🙂 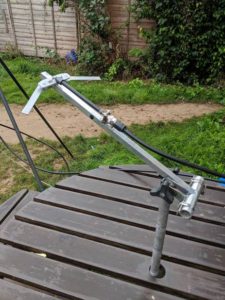 So thats it really the end of a spectacular journey. All that we ask is that you share this news far and wide in the hopes it inspires all those that have been told you can do it to give it a go 🙂 I will take this opportunity to thank all that have followed us on our journey and a massive thanks to Hartmut DG7YBN and Bernd DL7APV these two made it possible 🙂
Vy 73 de Tom M0ABA Dorothy M0LMR Richard G7OED .Essex DX Group